Twente: Land of the Horse Lover

In Twente equestrian sport goes back to an ancient tradition in history. The so-called ‘Twentse Ros’ has developed into a characteristic and prominent emblem of this region. Various logos, city and family arms testify to the unique relationship between man and horse in Twente. This relationship finds her origin in the traditionally strong agricultural character of this region, that is surrounded by the German equestrian bastion of Lower Saxony and North Rhine-Westphalia. This cultural historical background clarifies the enormous enthusiasm and love people from Twente cherish for their four-footed friends in general and the equestrian sport in particular. 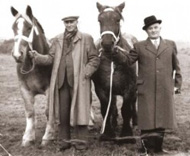 Thanks to the passionate devotion to horses and the equestrian sport in this region, CSI Twente has grown into a leading show jumping event in the international circuit. Riders, horse lovers, sponsors and volunteers, together they have raised the level of CSI Twente to what it is nowadays, without losing sight of what it is all about: the fascination for the harmonious relationship between man and horse.

History of the Grand Prix of Twente

After the Second World War, CSI Twente began as a small national show jumping event (1947) and took place in the meadows surrounding Erve Maathuis. Since 1975, CSI Twente gained an international status. The climax of CSI Twente is traditionally the competition for the Grand Prix of Twente. This classic knows a famous history with many illustrious winners and horses. Think of the legendary combinations as Hugo Simon and Gladstone, Jos Lansink and Libero H., Thomas Fuchs and Dollar Girl. These names will definitely ring a bell by many horse lovers and will be music to their ears. 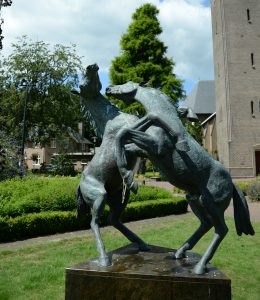 Horses in bronze before the St. Pancratius church in the centre of Geesteren.